A Light Goes Out

My dear friend Michael Shea has passed on through the veil. LOCUS ONLINE has posted an obituary. Michael is one of the finest authors in the world and I have been inspired by his example since my latter teens. He means a great deal to me. Words are inadequate. I gnash my teeth and shake my fist at the sky. It was too soon, it is always too soon. My heart goes out to his family and friends, and especially his wife, Linda. She’s a terrific person who has always been there through thick and thin for Michael.

A few years ago I had the pleasure of introducing Michael’s omnibus The Autopsy and Other Tales. I reproduce it here in his honor:

I first stumbled across Michael Shea in the latter 1980s when I read his terrifying novella, “The Autopsy,” in Hartwell’s seminal anthology series The Dark Descent. Though too callow to understand the depth of what I’d encountered, I steadily and inexorably pursued Shea’s fiction over the years, recognizing in it a kind of cynosure of the modern weird tale: a dark star shining at the heart of the matter. Not so long ago, I wrote an essay regarding the current state of the horror genre for the venerable LOCUS MAGAZINE. I said of “The Autopsy,”

“Shea’s dark masterwork remains etched upon my sensibilities as the ultimate example of how a storyteller may capture our wildest, bleakest, most fearful imaginings and bend them to the service of something far greater than an impulse toward the coarse and coarsely visceral.”

Shea demonstrates an unnerving facility for the macabre, the cerebral, the whimsical, and possesses the deceptively effortless ability to conjure scenes of horror and dread leavened by sly, acerbic humor. This prevalent undercurrent of humor unifies the frequently mercurial nature of his prose, its essential moodiness, and serves to accentuate set pieces and amplify and reinforce his themes in a manner analogous to orchestral accompaniment in cinema.

He employs absurdity and satire like weapons — behold the cynical protagonist of “The Extra,” and the nightmarish dystopia he calls home. Seldom have I encountered a more brutal indictment of corporate America, and sunny Hollywood in particular; an indictment all the more devastating due to its wry, jocular delivery, a recurring hallmark of Shea’s fiction.

Before writing this introduction, I perforce revisited Polyphemus and The Incompleat Nifft among other assorted tomes, much of which comprise The Autopsy & Other Tales. Thoughts of my impending task flew out the window as I was instantly drawn once again into Michael Shea’s realms of the dark fantastic. It is a testament to the man’s power, his storyteller’s guile, that I was immediately restored to the youth who’d been weaned upon Edgar Rice Burroughs, Robert E. Howard and Louis L’Amour. Without question Michael Shea is the contemporary analogue of these authors. It is apparent upon tracing Shea’s career back to his 1974 debut novel A Quest for Simbilis  that his original creative influences also hinged mightily on the likes of Jack Vance,  Fritz Leiber, and, as his career has progressed, Michael Moorcock and H.P. Lovecraft; four looming figures of the Western canon of the fantastic. Fantasy author Marc Laidlaw has called Shea’s prose “sinewy” and Algis Budrys made incisive reference to “the characteristic Shea touch of the grisly.” I would add “lyrical” as an alloy to those qualities that are fundamentally Shea’s. His work reflects the sensibilities of a poet — Robert Creely and Langston Hughes are singing in the spaces and the gaps. These harmonies create an astonishing effect juxtaposed and intertwined as they are with Shea’s gothic styling.

Shea’s prominence as an author, the motive force behind his enduring appeal, is a quality of versatility common to the most gifted of writers. Thankfully, this remarkable versatility in no way compromises the unique character of his voice. Indeed, Shea’s capacity as a visionary storyteller is augmented  by the strength of his voice. That voice is a dynamic and singular force and unmistakable no matter where his literary fascinations might lead him. Where one finds a certain playfulness of language, a devil-may-care abandon in the Nifft tales, there is nothing at all amusing about the stark, cerebral, indeed clinical, narrative machinery ticking away in “The Autopsy.” 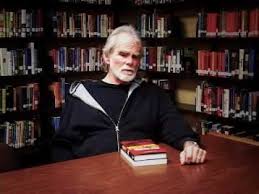 From his original authorized sequel to Vance’s Eyes of the Overworld; and unique science fiction horror smashups such as “The Angel of Death,” and “The Horror on the #33,” to the rollicking black fantasy saga of “Nifft the Lean,” these works are indelibly “Shea.” Here are stories one sets aside with a sense of melancholy, that bittersweet combination of satisfaction and regret engendered by the finest literature. To delve into Michael Shea’s world is to become embroiled in the perils and exploits of his characters: a rogues’ gallery of swashbuckling thieves, diabolical killers, quantum anthropologists, heroic doctors, and darksome intelligences from beyond the veil of Man’s tiny smudge on the galactic map. Indeed, to partake of the Shea experience is to be smitten by the profundity of imagination on display. One doesn’t want the ride to end, the door to close, the curtain to fall.

Our post 1970s world has been transfigured by magnitudes of social and technological evolution. Consequently, the field has exploded with a tidal wave of new ideas and approaches. The literary landscape has been continually, and often dramatically, reshaped in reaction to these forces. The science fiction and fantasy fields have seen the meteoric rise of epic high fantasy, cyberpunk, so-called splatter and the enigmatic genre known as slipstream, among scores of others. Since Shea emerged upon the scene speculative fiction has mutated and evolved at a relentless pace. Nonetheless, works such as “Polyphemus” and “The Extra” remain as relevant today as they have ever been. Continued attention from publishers, critics and awards juries strongly suggest that his relevance will persist in the decades to come.

Twenty years gone, in his introduction to the landmark collection Polyphemus, Algis Budrys called Michael Shea “an ornament to the field.” I can’t say it any better than Budrys, except to add my footnote: Shea has proceeded from ornament to star.

Now it’s time for me to step aside and let this dark star shine.