Final ToC of the Year’s Best Weird Fiction, Volume One

Michael Kelly and I are very pleased to announce the Table of Contents for the Year’s Best Weird Fiction, Volume One, due August.

“A Quest of Dream” by W.H. Pugmire, Bohemians of Sesqua Valley

“The Year of the Rat” by Chen Quifan, The Magazine of Fantasy & Science Fiction, July/August.

“The Girl in the Blue Coat” by Anna Taborska, Exotic Gothic 5 Vol. 1

“In Limbo” by Jeffrey Thomas, Worship the Night

“Swim Wants to Know If It’s as Bad as Swim Thinks” by Paul Tremblay, Bourbon Penn #8

“No Breather in the World But Thee” by Jeff VanderMeer, Nightmare Magazine, March.

“Shall I Whisper to You of Moonlight, of Sorrow, of Pieces of Us?” by Damien Angelica Walters, Shock Totem #7. 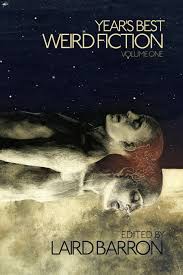 11 thoughts on “Final ToC of the Year’s Best Weird Fiction, Volume One”