Halfway Down the Stairs

I’d like to share a review I did for Locus Magazine last year. This concerns an important writer of horror and weird fiction named Gary Braunbeck and his omnibus of short fiction, Halfway Down the Stairs. He’s racked up plenty of awards and accolades over the years. Regardless, he’s deserving of more credit.

I recommend checking out Gary’s Amazon Page. He’s done a lot of fine work. When the horror is at its darkest, Gary is at his most humane. 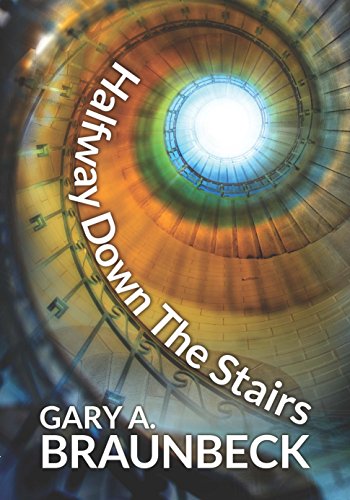 Halfway Down the Stairs by Gary Braunbeck

Without question Halfway Down the Stairs is a long overdue omnibus of horror stalwart Gary Braunbeck’s short fiction. It’s a massive tome weighing in at nearly six hundred pages and collects the vast majority of the author’s output over the past couple of decades. Winner of multiple Bram Stoker Awards and student of the best 1970s and ‘80s horror traditions, Braunbeck hybridizes the supernatural themes and narrative slickness of Stephen King and marries them to Jack Ketchum’s soulful tales of human frailty. His purview is the shadow kingdom of human existence—abuse, addiction, and violence in its infinite variety. Redemption exists out there somewhere in the darkness, a fragile flame in the gloom.

There is no way to thoroughly examine a book with this scope. The best I can hope for is to illuminate a handful of fragments of the whole. Halfway Down the Stairs is broken into three sections, divvying up around forty stories that span Braunbeck’s career. Part One is titled Throw it at the Wall and See What Sticks. The author notes he considered Potpourri but decided it was “too cutesy” and his estimation was correct—the last thing one could ever call a Braunbeck story is cutesy. It’s an interesting choice to frontload the collection with lighter (relatively speaking), thematically disjointed material, much of it bite-sized in regard to page count. “Crybaby Bridge #25” introduces the rural legend of “crybaby bridges” where motorists park and listen for the eponymous crying babies. There are twenty-four known bridges, but this story is concerned with the twenty-fifth and its connection to a man consumed by grief and guilt. “Attack of the Giant Deformed Mutant Cannibalistic Gnashing Slobberers from Planet Cygnus X-2.73: A Love Story” is a campy mouthful (pardon the pun) and indicative of the scattershot approach that typifies the opening section. Among the longest selections from the first third of the collection is “Cyrano,” a bizarre and hallucinatory tale of time out of joint. Braunbeck shifts from workmanlike prose to deliver chilling descriptions such as this:

His flame-charred flesh slithered from bone, drooping like the sleeves of a dark cloak, when suddenly he beheld near him a hunched and shivering figure wearing only a dressing-gown, slippers, and nightcap. He pointed at the figure and perceived with a start that he was, indeed, wearing a great black cloak whose hood concealed his hideous countenance. No cursed flesh covered his skeletal hand.

Part Two is called With a Little Help from My Friends, a reference to the fact each piece in this section is introduced by a fellow author ranging from Chet Williams to Ramsey Campbell. Here, Braunbeck his legs a bit and we are treated to several novelettes to complement the briefer selections. “Afterward, There Will be a Hallway” speaks of the afterlife. A Bram Stoker Award winner, it ranks among his more popular stories and justifiably so; “Just Out of Reach” is set in his long-running Cedar Hills setting, although possessed of a more science-fictional bent than might be expected; it is directly followed by “El Poso Del Mundo,” a noir-ish tale of deception and violent reversals very much a product of the underbelly of our world and our time.

Sometime Then is Part Three and contains what Braunbeck considers his more popular stories. Two of the best set the pace: “Rami Temporales” is a disturbing story of abuse and the perils of having “one of those faces,” while “The Sisterhood of Plain-Faced Women” and its recurring allusions to T.S. Eliot’s “The Love Song of J. Alfred Prufrock” pulls us back to Cedar Hill where we bear witness to the conflict between the ephemeral nature of memory and the blood and grit of daily life in a doomed town.

By no means gratuitous, Braunbeck’s depiction of violence and suffering are not for the faint of heart. The finest horror authors mitigate, and paradoxically enhance, the horrific by investigating real human motives and real human emotion. Braunbeck works noir and crime at will. He’s a blue collar guy and his style is tough, albeit with the melancholic core of a poet. Contradiction is the secret to his success. Humans are fragile, tricky, indestructible superbeings that melt in the face of adversity, yet persist beyond all reasonable reckoning when you give them up for lost. Weak, resilient, cruel, base, profoundly noble, and kind to a fault. Predictable and totally inscrutable. Braunbeck understands what makes us tick. Previously I remarked that Tananarive Due, another fine author of the dark fantastic, is at her best when she explores the depths of the heart and her strength is her humaneness. Humanity, humanness are also the signature of Braunbeck. There’s more hard bark on his hide, though, and an old school aesthetic that intimates a storyteller who weaves in darkness must be cruel to be kind.

Tim Waggoner sums it up in his preface to “El Poso Del Mundo”:

…horror that matters—isn’t about machete-wielding maniacs, but rather the pain that eats like cold acid at the center of the human heart.

Nothing truer could be said of Gary Braunbeck’s contribution to the horror canon.

5 thoughts on “Halfway Down the Stairs”