Golkonda recently published a German edition of my stories, Hallucigenia.

From the publisher site (auto-translated):

A man who gets on a trip to India the opportunity to participate in a unique art performance, and accompanied by a group of cynical, sensationalist businessmen in an insidious nightmare slipping … A couple who makes a macabre discovery in the no man’s land north of Oregon, seriously injured returned to civilization and watch helplessly needs as slipping him health, money, happiness and intellect … an occult book, a harmless camping trip to a fact mentioned place, a group of young men who well with alcohol and violent excesses are familiar – and the helpless solidify the face of terror, which they confronted, …

Hallucigenia contains four long stories of the most important horror writers of our time. Deliberately exaggerated Barron his stories on those dramatic moments, with which he brings the reality of the Lot. Piece by piece disintegrates to his protagonists around the reality, until they to suffer wild thrashing the final physical and mental breakdown.

Thematically rich in Hallucigenia stories contained by summoning cosmic horror to the psychological thriller. The cover story of the core pieces of its mythology is included.NIC PIZZOLATTO, creator of the television series TrueDetective, has declared to have been significantly influenced by Laird Barron.

Deustchlandradio Kultur has given it a review.

4 thoughts on “Deutschlandradio Kultur on Hallucigenia” 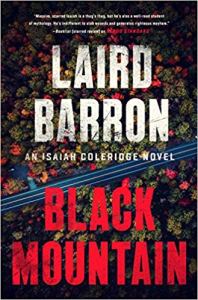